A Pilgrimage of Discovery

Materials for the Report to the Congregation, November 4, 2018

Grace Presbyterian Church hosted a trip to Israel, Palestine, and Jordan in the fall of 2018. Family and friends from other churches across the country joined Grace members to create a travel group of 21. Susan Wilder led the group, with able assistance from Kathy Drinkard and Ben Trawick.

The trip was called "A Pilgrimage of Discovery" and involved a multifaceted set of "discoveries." The group engaged in four major activities:

1) Reconnecting with our partner church in Nablus, Palestine, and with Father Ibrahim, who is now at a church in Zarqa, Jordan

On the first two nights of the trip, the group stayed in the homes of church members. They also attended worship on Sunday, September 30, at The Church of the Good Shepherd, the Rafidia satellite of the St. Philip's Episcopal Church in Nablus. The Grace members offered as gifts some pieces from the Grace congregation's communion set and a calendar of D.C. photos taken by Alan Goldstein. The Nablus congregation gave the Grace church a beautiful embroidery of the Lord's prayer.

On October 7, the group worshiped with Father Ibrahim, the previous pastor at the Nablus church, in his new church in Jordan. The congregation was having a Thanksgiving-style service and provided a reception for the group afterwards.

The travelers experienced the holy sites in Israel, Palestine, and Jordan, exploring how each site was portrayed scripturally and reflecting on its personal spiritual significance. They visited:

A major purpose of the trip was to obtain a better understanding of the conflict between Israel and Palestine. The group met with officials, organizations, and individuals who address the conflict from their own perspectives. The group also experienced restrictions common to the Palestinians, including water limitations, checkpoint searches, and segregated road access. The people and places visited included: 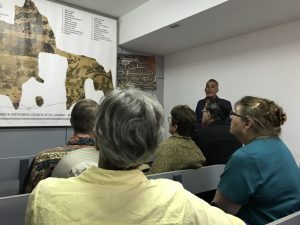 Although the church had sponsored trips to Israel-Palestine in the past, it had not included Jordan before this trip. The group explored holy sites (mentioned above) in Jordan, as well as: